With unrest in the Middle East spreading and the prospect of peak oil looming, attention is once more centered on Green Energy and renewable energy resources. General Electric has recently held phase two of their Ecomagination Challenge, this time centered around " Powering the Home". The entry entitled "Micro Hydroelectric power generation for the Home" offers a simple, cost effective and easy to implement project that offers the possibility of generating around 2.5 KW of power 24 x 7. This works out to about 60 units of power during a period of 24 hours. This diagram illustrates how the system works. 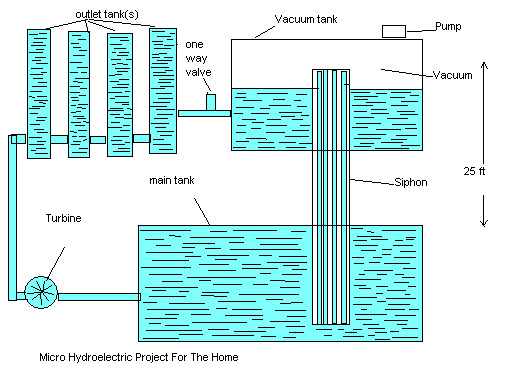 From Mar 23, 2011
The idea behind the project is quite simple make use of atmospheric pressure and a vacuum to lift water to a height of 25 feet or so, and then let this water out through a pipe of a suitable diameter through a vertical drop of 25 feet to turn a turbine and generate electricity. The same water would be used over and over again creating a clean , non-polluting source of usable energy. The Micro Hydroelectric power generation system works on the principle that atmospheric pressure can support a column of water 32 feet high. See this Link :
Calculations show that water flowing through a 4.75 inch pipe and falling through a vertical drop of 25 ft will generate a constant 2.5 KW when impinging on a turbine, the water is then re-routed to a tank and sent back to the top through a siphon using atmospheric pressure and a vacuum. In this way the water can be recycled over and over again.
Although , this might sound like a perpetual motion machine it is actually using atmospheric pressure and the presence of a vacuum in the upper holding tank to sustain the process. The idea is interesting enough to merit seeing if it works.
The first and most important criteria is to determine whether a vacuum can be created in the upper holding tank using a nominal amount of power. To illustrate that the project is practical, the inventor of this project, turns to a historical example. In the 1600's Baron Otto Von Guericke, a contemporary of Sir Isaac Newton, became fascinated by the possibilities of using a vacuum. He invented the Magdeburg sphere to demonstrate his concept, consisting of two hollow copper hemispheres which could be joined together with an air-tight seal. Once joined into a sphere, the air inside was evacuated using a crude vacuum pump. The vacuum inside the sphere proved to be so strong that 24 coach horses attached to the sphere could not pull them apart, Guericke would then demonstrate that by opening a valve and allowing air to enter into the sphere the two halves of the sphere would fall apart by themselves. The point of this story ? It illustrates that even a crude vacuum pump using leather flaps for valves can create a satisfactory vacuum. A vacuum pump can be designed in such a way as to minimize the effect of atmospheric pressure so that it needs a minimum effort to evacuate the tank, for instance a pump with a 200 cc barrel capacity would take less than 4 minutes to empty out a tank that is 2m x 2m x 1m , if the barrel of the pump is split into 20 smaller individual compartments it would take only about 100 W of power to work. This amount of power could be provided by batteries that are charged by solar panels or wind turbines. What is even more interesting is that the inventor claims that the pump need be turned on only occasionally when air bubbles disrupt the vacuum in the upper holding tank. He claims that if a proper balance is created between water flowing into and out of the tank, the vacuum will be self sustaining, because as the water level drops in the tank it creates a suction effect that induces a vacuum, that in turn pulls water up through the siphon.
"The idea behind the project is simple, if Otto Von Guericke could astound people in the 17 th. Century with his Magdeburg sphere which could not be pulled apart by the exertions of 24 coach horses. It should be possible to astound people in the 21 st Century by demonstrating how a steady flow of water can be sustained to generate a continuous supply of electrical power at around 2.5 KW by using atmospheric pressure and a vacuum. It is all a question of logistics, weight of atmospheric pressure versus weight of water and of calculating exactly a matching inflow and outflow of water through the siphon and the generator pipe and of preventing entry of air bubbles in the tank with the vacuum. These are not insurmountable problems by any means and can be quite easily solved. "

The Life Cycle Of The Red Fire Ant

What Needs Caulking in a House?

What Works Better: Nails or Screws?

Convert Your Ideas Into Actual Homes With Architectural Services!

Benefits Of Facilities Management For A Company

Tips With Regard To Using The Services Of A Locksmith.

How to Service a Poulan Land Shark Chainsaw

How Does Heat Tape Work?

How to Repair Rotting Wood Siding

How to Glue Plastic Numbers to Vinyl Siding

Car Insurance Recommendation Tips For You

Features to Look For When You Compare Insurance Quotes

How Do I Know What Is the Right Auto Insurance for My Car?